I’m starting to go back into the office again, after working from home for the past two months, due to a foot injury. To celebrate, I wanted to make a savoury treat, and this scone recipe from Bouchon Bakery caught my eye.

This is not a wake up in the morning kind of recipe as the shaped dough needs to freeze for at least 2 hours, and preferably overnight, before baking.

I made two batches, one without the bacon. At the point where all the cream was added, the dough was very stiff, but the mixer was able to power through it and incorporate the cheese and green onions. I made the batch with bacon second, so that I wouldn’t need to wash the mixer parts, and contaminate the non-meat scones. 340g of raw bacon was more than enough to yield 77g of cooked, but it’s not a bad thing to have some around for breakfast. 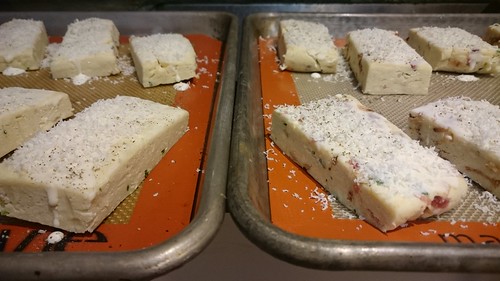 To save time, I popped the shaped, rectangular slab of dough into the freezer for about 30 minutes to firm up, rather than the 2 hours of refrigerator time. The next morning, I arranged the blocks of dough onto two Silpat-lined sheet pans, brushed them with cream, and grated some Parmesan on top (I ran out of white cheddar). 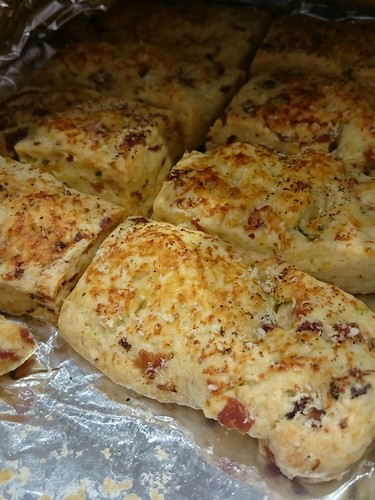 At just over 30 minutes in a convection oven, the tops were nicely browned, so I pulled them out. After cooling for a few minutes, we broke one apart and had a taste. Wow. With all that rich dairy (heavy cream, crème fraîche, white cheddar, and butter), every bite was moist and tender, and the smoky bits of meat and fragrant green onions just made them even better. These were gone in a flash at the office; I would definitely make these again.