I’ve really embraced the custom of eating fried foods to celebrate Hanukkah. A few weeks ago, we started planning a menu for a party we would be hosting. Of course, doughnuts needed to be on that menu, and I chose one of the recipes from Bouchon Bakery to make.

Errata note: The recipe in some editions of the book, as well as in the copy I linked to, contain an error in the measurement of the butter. One batch of doughnut dough should have 57 grams of butter, not 5 grams.

To feed our crowd, I decided it would be best to make two batches. I wondered whether I would be able to do it on session, since the dough needs to be kneaded in a mixer for 30 minutes. Despite the instructions, my dough wasn’t sticky at all, and easily cleared the bowl and became quite stiff. The mixer itself got really hot, so I made one batch in the morning, and another in the evening. Make sure your butter is soft, and don’t try to quickly soften it in the microwave unless you’re really careful. Butter won’t incorporate nicely into the stiff dough if it’s partially melted. 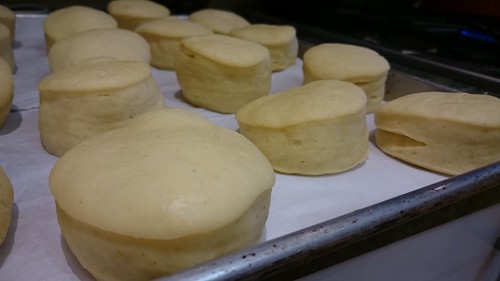 After folding, resting and chilling the dough, I rolled it out and cut it into discs. The standard yield for the recipe is ten, 3-inch doughnuts, but we decided to use 2-inch cutters for a more manageable snack. Following the instructions on freezing unbaked brioche pastries, I froze the individual pucks on a sheet pan, then put them in a freezer bag once they were hard.

A few days later, on the morning of the party, I took out the frozen doughnuts, spacing them on a parchment-lined baking sheet, and covered them with plastic wrap to let them slowly proof. This took about 4 hours. 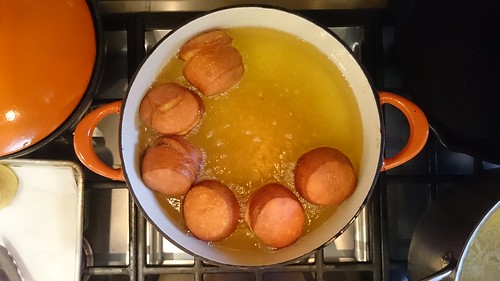 In a Dutch oven filled with about 2 inches of canola oil, I heated it until the temperature was a steady 335°F. Not all of the doughnuts were perfectly cylindrical: as they expanded in the hot oil, one side would rise more than the other. I used tongs to flip the fried dough so that it would brown evenly. 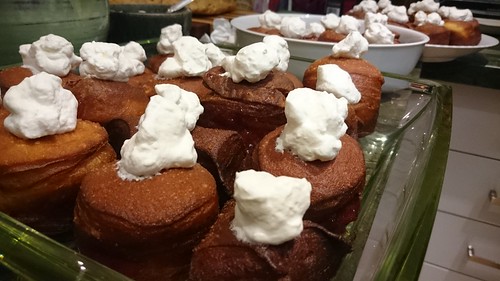 Once all the doughnuts were cooked, I set them outside briefly to cool completely, before my helpers filled them with cherry jam. Using the piping bag was messy, as we pureed a jar of cherry preserves causing the filling to be very runny. It was also difficult to create a large enough cavity to pipe enough jam inside. In the end, the best technique was to poke a hole in the top of the doughnut, so that gravity would keep the jam from spilling out (thanks Steph!).

The verdict? I found these doughnuts to be way too dense. The brioche base should have made for a very soft doughnut. Maybe the smaller size meant I should have fried them for a shorter duration, or maybe the gluten was over-developed. In any case, fried dough is still enjoyable, slathered with whipped cream and extra jam. Leftovers were much better if you microwaved them for a little bit.