At the end of the year, Dr. S brings a holiday treat for her staff. In the past, we made caramel corn. This year, we decided to try chocolate covered toffee with nuts.

The recipe comes from one of Dorie Greenspan’’s cookbooks, Baking Chez Moi. I saw it in the front window of Circus, our local used bookstore. I own several cookbooks that she’s authored (Baking With Julia, Desserts by Pierre Herme) but this is the first one I’ve owned where the recipes originated from her. 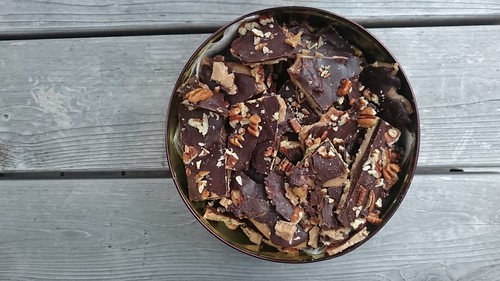 Anyway, the toffee is just caramelized sugar with a lot of butter mixed in. It took more than 10 minutes for mine to get up to the required temperature. And then it was pretty quick to set up on the parchment-lined sheet, but not so fast that it was impossible to spread to a thin layer. This toffee isn’t the hard-as-rocks kind, but shatters when you bite it, so don’t worry about trying to get a super thin layer. 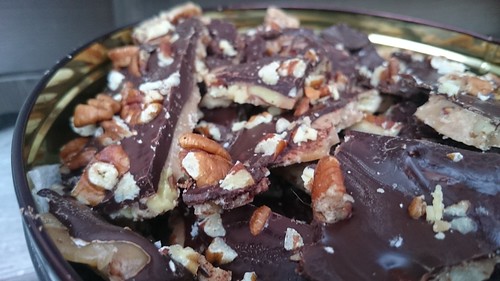 Feel free to use more chocolate, as the given amount results in a pretty thin layer of it. And we used pecans, rather than the almonds in the original recipe. It’s going to taste good whatever you use. Almost the entire container got eaten at Dr. S’ workplace so I was only able to sample a few pieces.