As parents of a junior kindergarten student, we’re now part of the school community. An email announcing a bake sale arrived in our inboxes a few weeks ago, and Dr. S and I had a spirited discussion about what I should make. In the end, a chocolate-based cookie won out. 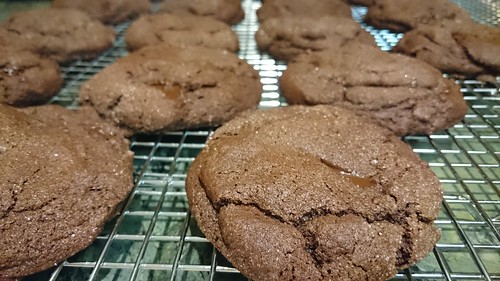 The recipe is from the January 2009 issue of Cook’s Illustrated. It achieves chewiness through three techniques: using egg whites only (cut down on excess fat), using cocoa powder (again, cutting down on excess fat from chocolate), and using corn syrup (in place of some granulated sugar). I made two substitutions that didn’t affect flavour or texture, in my opinion: clear corn syrup instead of dark, and light brown sugar instead of dark. 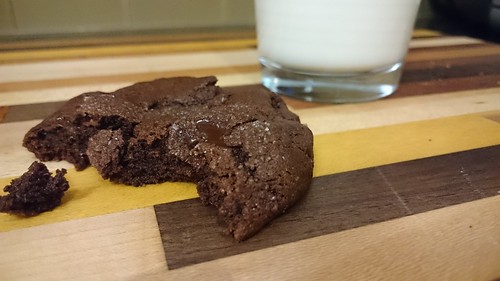 If I really wanted to ensure identically sized cookies, I would have weighed the bowl of dough, and then portioned out exactly 1/16th of the dough for each cookie. But I just eyeballed it, so some cookies came out smaller than others, and some were thicker than others. Not all of my baked cookies had cracked surfaces, but they were definitely done at the specified time, 10 to 11 minutes.

These turned out amazing: true to their name, they were chewy and chocolatey, even 2 days later (kept in an airtight container, of course). I bet you they would be even tastier (at least, more caramel flavoured), had I used the specified ingredients.