There’s no sweet ingredient more beloved by my wife than chocolate. So, naturally, I knew a chocolate cake would make her (Valentine’s) day. I pulled out one of Marcel Desaulniers’ books, Death By Chocolate and found just the right dessert.

As is the case in many of his cake books, the recipe is ridiculously titled. In case you didn’t know (as I didn’t), a phantasmagoria is “a fantastic sequence of haphazardly associative imagery, as seen in dreams or fever”. What kind of name is that for a dessert!? 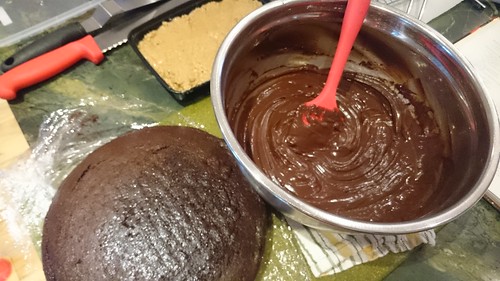 I started by making the hazelnut butter, which was literally hazelnuts + butter. Toasting and skinning the nuts was the time-consuming part. The finished mixture tasted like hazelnuts, but not that enticing, as it lacked sugar and oil, and it’s definitely not the same as hazelnut paste, which is made from praline.

There’s not much to say about the cake, other than to note that it includes both cocoa and unsweetened chocolate, as well as using boiling water. My layers weren’t of even thickness, as I I tried to slice the baked cake on a cutting board, instead of on a turntable. 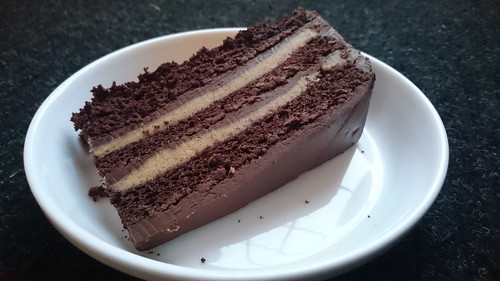 Assembly was a breeze, and my only tip is to ensure the nut butter and ganache are soft enough to spread easily. Make judicious use of a microwave or double-boiler as necessary. If the fillings are too stiff, you’ll risk tearing the cake as you frost them.

My wife noted that the cake was a bit dense and dry. I also found it to be undersweetened. Hazelnut and chocolate is a classic flavour combination (who doesn’t like Nutella?) but I feel a slice of this cake needs to be accompanied by a hot, sweetened beverage, like a café au lait or a milk tea.