For a dinner my wife hosted for her grad students, we made a vegetarian chili and wanted cornbread to go with it. The version in Bread Baker’s Apprentice is one I’ve made a few times before, but have never written about. It’s easy to make, and is full of corn flavour. 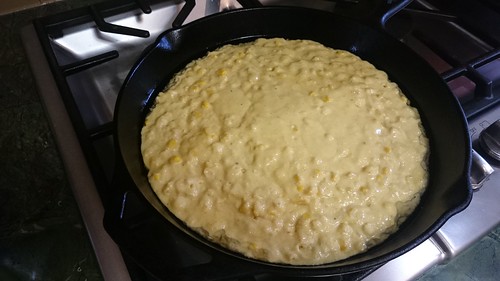 The night before, I soaked medium-grind cornmeal in some buttermilk. The recipe says you can leave it out overnight at room temperature. I placed it by an outside door, just in case. On the morning of the dinner, I made the batter, adding a few tablespoons of freeze dried corn powder for extra flavour and colour. 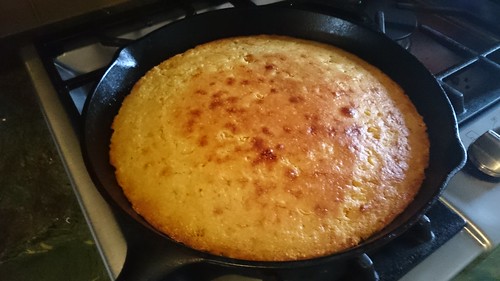 The recipe says you can use a 10” round pan, or a 9×13” pan, or a 12” square pan. These have wildly different surface areas! The difference, obviously, is that the cornbread will either be thicker or thinner, but it also changes the baking time. I used a round, 12” cast iron pan, and it was done in 30 minutes. 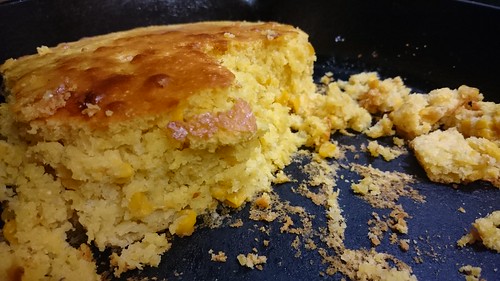 As we were keeping it vegetarian, we omitted the bacon from the original. Reinhart actually suggests making chicken or turkey cracklings to sprinkle on top: something to keep in mind for next time. 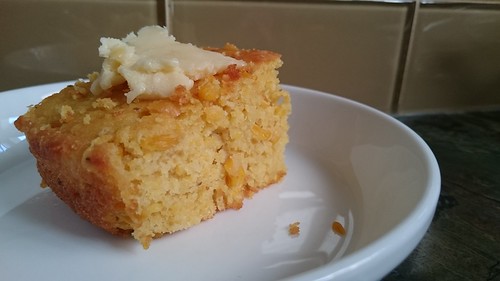 This is not a fine-crumbed cornbread, but one that is moist and full of niblets. I made it with spicy honey and served it with a compound butter, made with the same honey. In the future, I’d probably use a bit less corn, so that the cornbread would be drier, and more suitable for soaking up sauces or gravies.