For a spur-of-the-moment dinner for guests on Saturday night, I wanted to have a make-ahead sweet course to leave time for the other dishes. This pudding was easy to make, and the two garnishes really elevated the dessert.

The recipe is from Pichet Ong’s In The Sweet Kitchen. The original calls for cardamom and star anise, but we didn’t think the under-five crowd would enjoy those flavours, so I omitted them. To speed up making the pudding, I melted the chocolate and butter together in the microwave, then poured the heated cream over top, stirring until it was smooth. I portioned the mixture into tea cups and ramekins, then let it refrigerate. 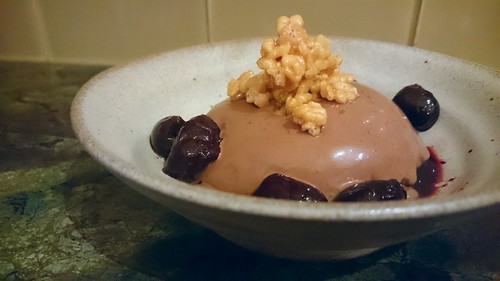 Next, I made the drunken cherries. Two pounds seemed like a lot for a garnish, so I ended up making a quarter of this recipe. I microwaved some frozen black cherries, draining (and drinking) any juice that was released. I mixed the fruit with balsamic vinegar, vanilla extract, red wine, and Kirschwasser (the recipe calls for sake, which I did not have on hand). 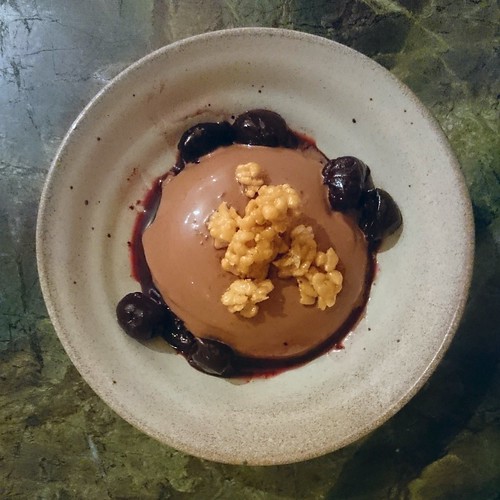 The caramelized puffed rice was my favourite part: you make a caramel from sugar, corn syrup and butter, taking it just past the hard crack stage, so that the caramel will be solid after it cools. After stirring in the cereal, it needs to be spread thinly on a silicone mat, so that it doesn’t harden into large clumps.

To serve, I placed the cup and ramekins in a shallow bowl of very hot water for about 5 seconds, and then inverted each one over a plate. After just 4 hours in the fridge, the pudding didn’t set completely: I should have cooled it over ice first. But leftovers on subsequent days were the proper consistency. The pudding itself was surprisingly bitter, enough so that my kids didn’t like it. That’s not surprising, since there’s no added sugar in the pudding, only the sweetness from the chocolate (mine was 72%). Combined with the tart-boozy cherries, and sweet, crunchy Krispies, this was a really, really good dessert, but perhaps not the best one for children.