I learned a lot about baking bread from Peter Reinhart’s The Bread Baker’s Apprentice, and that book is where I first encountered fougasse. I don’t think I’ve made it since a class at George Brown. But when the most recent issue of Cook’s Illustrated landed in our mailbox, I was curious to read about their take on this bread. 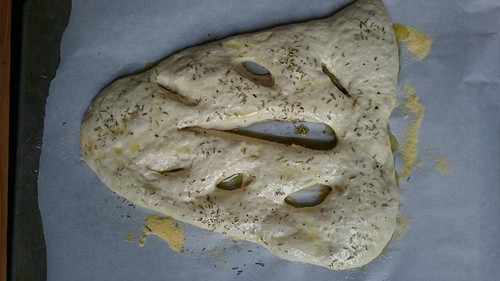 The recipe in the March 2016 issue describes fougasse as a “bread made for crust-lovers”. Their ingredient list incorporates a small amount of whole wheat flour for flavour, but has you sift out the bran to avoid its sharp edges from compromising the gluten network. I didn’t follow the initial stretching and resting times strictly, sometimes letting the dough relax for over an hour, sometimes for just half an hour. I did leave it to ferment in the fridge from Sunday afternoon, to Tuesday morning, about 36 hours in total. 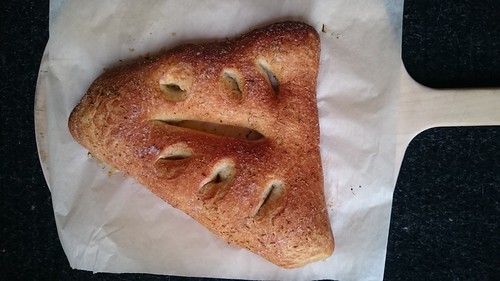 I had a bit of trouble rolling the stretched dough back out a triangle of the dimensions they described (8” base, 10” sides). It tended to spring back. The smaller size also meant it was harder for me to make all the cuts. Another deviation from the recipe was accelerating the resting times, since I was making this on a weekday morning, and needed to get my children to school on time. 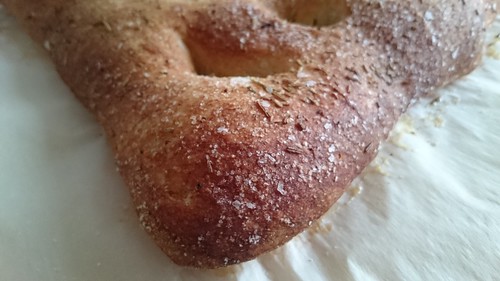 The baked flatbreads were beautifully browned, and while the openings weren’t very pronounced, there was definitely a lot of crispy crust. I sprinkled my loaves with kosher salt (as I didn’t have any other coarse salt) which meant that every bite was deliciously salty. My kids couldn’t get enough of it. 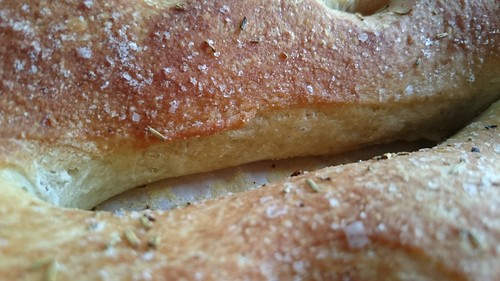 Fougasse is more work to shape than a boule or bâtard, but it definitely has more visual appeal. Plus, the extra surface area yields more crust, which is a Good Thing™.