We’re spending two weeks at two cottages this summer, in the Haliburton region. Yesterday afternoon, we passed a wonderful afternoon at Magnificent Hill, meeting farm animals, collecting chicken eggs, picking raspberries, and enjoying the outdoors. With the bounty we harvested, including a box full of rhubarb, I turned some of it into a delicious crisp. 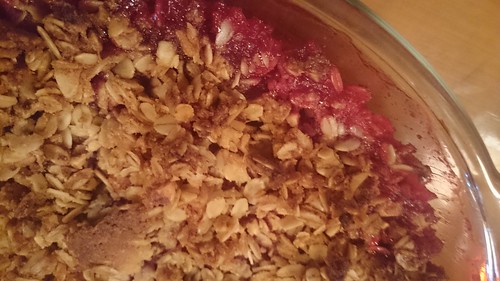 The friends we are staying with are avoiding dairy and gluten, so I adapted this recipe from the Minimalist Baker. One look at the sugar in the filling and I knew it was way off: 1 to 3 tbsps for 4½ cups fruit? That couldn’t be right. The sour cherry pie had three-quarters of a cup for about the same amount of fruit! I checked with a Martha Stewart recipe for rhubarb crisp, which called for ⅔ cup of sugar, which sounded way more reasonable.

For this crisp, I used a heaping 4 cups of rhubarb, chopped small, 2 cups of raspberries, ⅔ cup sugar, and the zest of a clementine. Neither recipe called for a thickener, which gave me pause, but I stuck with the directions. As for the crisp topping, I used finely chopped almonds instead of pecans, and a margarine in place of butter. 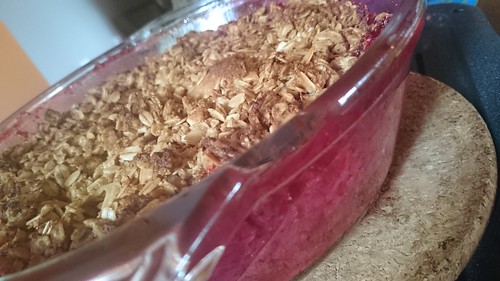 This was a delicious dessert for the end of our day, one that everyone found tart but comforting. The oatmeal was too chewy, picking up too much of the liquid from the filling; maybe grinding some of it up, and making the nuts coarser, would fix that. Rhubarb isn’t something that I cook with a lot, but whenever I come into a large quantity, it’s nice to know there’s a dessert to fall back on.