The passing of strawberry season marks the beginning of cherry season. At the farmer’s market this weekend, we picked up two baskets of sour cherries intending to turn them into jam. But the extremely hot weather deterred us from that canning project, and a last minute call for a dessert prompted this delicious pie. It was a resounding success, as five adults and three children devoured the entire thing in one sitting.

I adapted a recipe I found on Smitten Kitchen. I already had a single pie crust dough in the freezer, which I put in the fridge to thaw. To prepare the filling, I first squeezed the pits out of the tiny, bright red cherries. I did this over a strainer, to catch any juices. Then, I mixed the cornstarch into the sugar, before stirring it into the fruit. I added the seeds and pod of a vanilla bean at this point too. 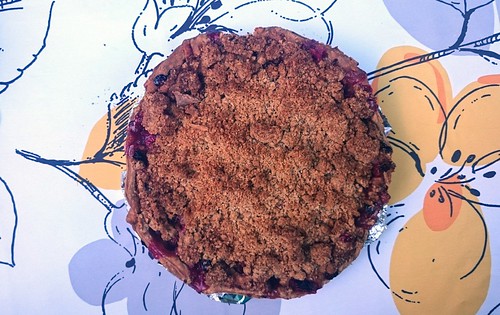 While the cherries macerated, I rolled out the bottom crust into a false bottom 8” tart pan, and put it in the freezer for 10 minutes. To make the crumble topping, I followed the recipe, but used about ½ cup ground almonds, instead of grinding whole nuts. This made for a very fine crumb, which I lightly pressed into larger clumps. Toppings like these are pretty forgiving, so you can adjust the amount of oats, nuts and butter to your liking. 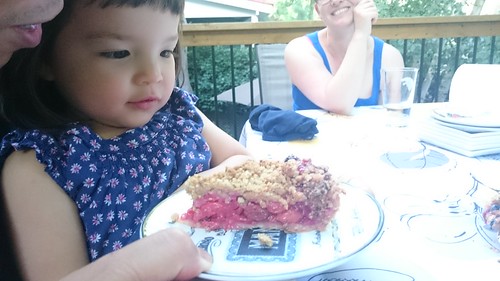 Since a lot of juice was exuded, I used a slotted spoon to drain the cherries before putting them in the frozen crust, but put back some of the liquid, so the filling wouldn’t be too dry. Note that this recipe suggests blind-baking the crust first, but I didn’t, and my bottom wasn’t soggy. YMMV, of course. 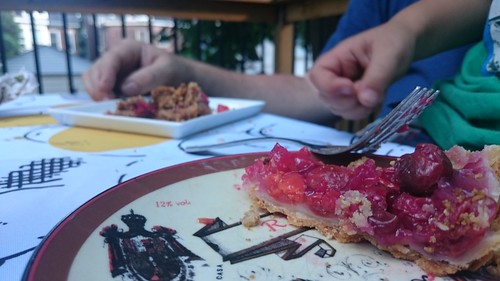 The finished pie was a deep golden brown all over, and individual slices held up nicely on the plate. The amount of sugar called for (¾ cup) was just enough to balance the acidity of the fruit, but still left it plenty tart, as a sour cherry pie should be. I was hoping the vanilla would contribute a hint of sweetness, but it was too pungent. I would make this again without hesitation, maybe playing with the coarseness of the crumble.