I bookmarked this article earlier this year, intrigued by a Montreal bakery with Jewish pastries that I hadn’t heard about from my wife before. This week, my last in the office before the New Year, I brought in the babka to rave reviews. 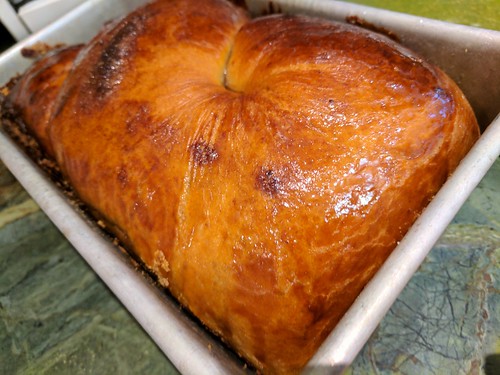 The recipe is by Marcy Goldman. She adapted it from her own, with the goal of recreating the ones she sampled from Boulangerie Cheskie. Having made Ottolenghi’s babka, and a deluxe almond paste/dried fruit version in the past, I’ve had some experience making this type of bread before, but it seems there are as many babka variations as there are babcia.

Making the enriched dough was straightforward, and it didn’t rise that much. As for the filling “schmear”, I thought that 3 cups of sugar in total was excessive, but went with it. I didn’t end up the whole amount though, as there was more than enough to fully cover the thin, rolled sheets of dough. (I saved the rest to stir into hot chocolate, one tablespoon at a time.) 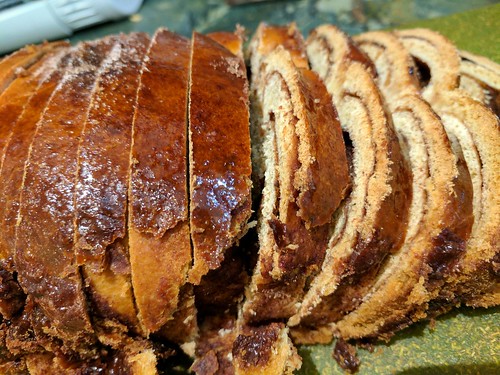 Goldman doesn’t give precise directions on putting the long roll into the loaf pan. I curled the dough into a U shape, then gave the ends a twist, before lowering it into the pan. One unusual aspect at this point is brushing on the egg wash, and sprinkling on the cinnamon-cocoa mixture, before refrigerating the loaves for three hours.

After baking, I started on the sugar syrup, but was again taken aback by the amount of sweetener: 1 whole cup of sugar to brush onto two loaves. I made half the quantity, brushed it on generously, and still had a few tablespoons leftover. 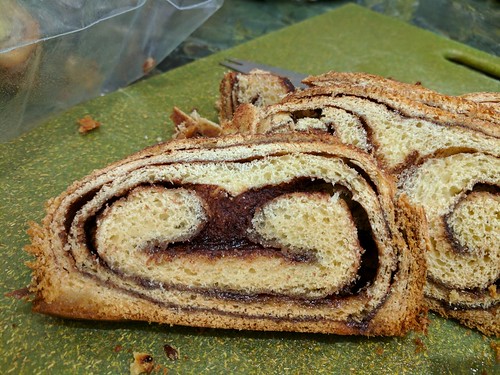 The finished product was without question, one of the most delicious things I made in 2016. The aroma of cinnamon and chocolate, together with the slightly chewy, tender bread, covered in a sweet glaze… yum.