I enjoy eating things with raisins in them. And dried fruit too. Oh, and cinnamon. There I said it. I’m one of those people that like things like spumoni and fruitcake. Unfortunately, I’ve been unable to convince anyone in my family to enjoy these things. That didn’t stop me from making a wonderful panettone, the sweet Italian bread, full of vanilla and citrus flavours. And raisins!

The recipe came from one of Peter Reinhart’s books, known as “BBA” to bakers online. My first attempt at this recipe was a failure: I didn’t use a refreshed bread starter, nor did I proof the dough at a warm enough temperature. Lastly, I split the dough between an 8” pan as well as some mini baking papers. The result of all these blunders was a dense, dry product, that had an unpleasant chewy texture. 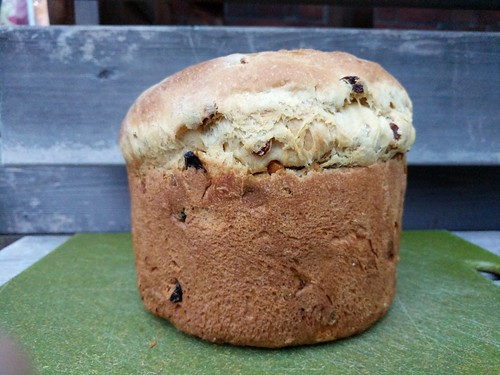 To make this bread during the week, I started with the sponge after dinner. I used a refreshed liquid levain I’ve been maintaining as the “bread starter”. I don’t think it’s too important what hydration your starter is, as you’ll adjust it in the final dough anyway. I made the dried fruit mixture too, using whiskey, raisins, candied lemon peel, and a blend of vanilla, lemon extract and orange oil. 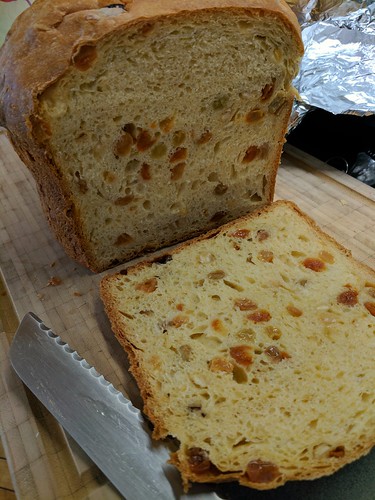 The next evening, during dinner, I made the final dough in a stand mixer. Reinhart’s instructions note a desired temperature of 24 to 27ºC (75 to 80ºF), which I discovered I wasn’t reaching by leaving the dough on the counter. To remedy this, I put the dough (covered in plastic) in my oven, turned it on for a few minutes, and then left the light on. 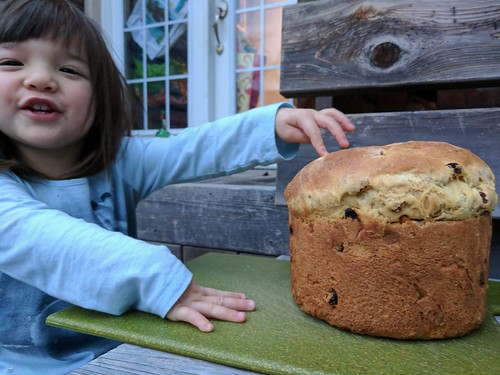 To shape, I put the whole batch of dough in my 8” panettone pan. It crested well above the rim by the time it was put in the oven. This time, my loaf came out beautifully: pillowy and light, with an incredible aroma. Each slice was full of dried fruit, and was sweet enough for a snack on its own.

Reinhart’s formulas for panettone are winners, both this one, and the whole wheat one I made a few years ago!