After our annual apple-picking trip netted us 20+ pounds of apples, my first project was apple butter. I did it the easy way this time: letting the slow cooker gently cook and reduce the fruit puree.

The recipe I used is from Serious Eats. There is a huge variation in ingredients and instructions online: some do all the cooking in a crockpot, others do some pre-cooking in the oven or on the stove. Some use a huge quantity of sugar, others much less. 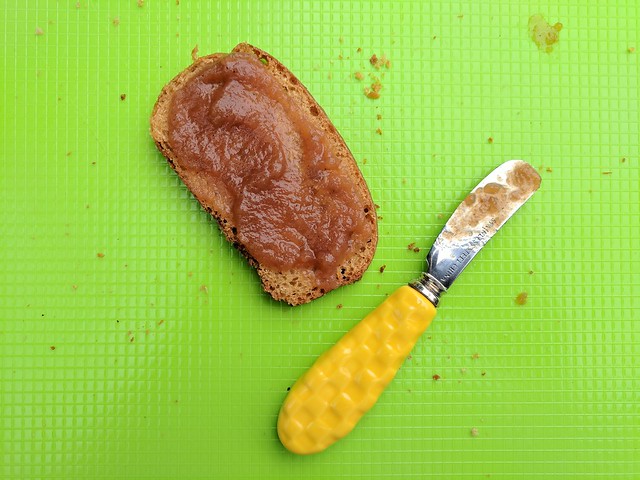 It made sense to cook down the apples in a pot first, as the higher heat would speed up the process. Once the fruit is soft, you puree them with an immersion blender, then do the reducing and caramelization in the slow cooker. My apples were all Golden Delicious with a few Asian pear fridge orphans thrown in. I halved the sugar (using only dark brown, omitting the white) and the only spice came from a half teaspoon of cinnamon.

The recipe calls for about 8 hours of cooking, but we let it go for about 10. The colour was a pretty deep caramel, but the consistency was pretty loose. Next time, I’ll experiment with leaving the lid slightly open. Flavour-wise, I loved the intense, apple concentration but wished it were a bit thicker.