It’s the month for deep-frying at our house, to celebrate Hanukkah and the miracle of the oil. Indeed, frying foods in oil is miraculous, transforming plain food items like broccoli and potatoes into addictive, crispy tempura and French fries. This year, in addition to crowd-pleasing churros, I also made yeasted doughnuts, with a choice of two glazes. 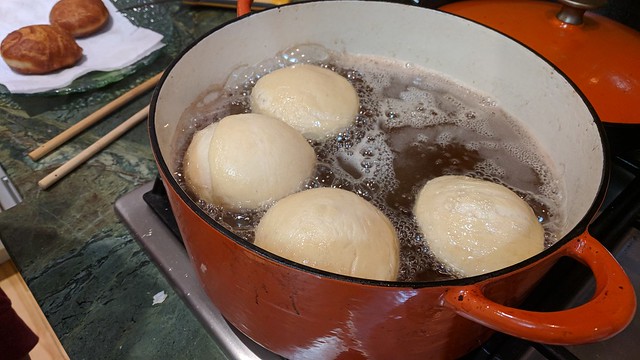 There was a lot going on in our house on Saturday, so I didn’t get started on making the dough until 14:00 or so, barely two hours before people were starting to arrive. I used a recipe from King Arthur Flour, which made a soft, pillowy dough.

After the first rise, I rolled it thin and cut out smallish circles, letting them rise on two half-sheet pans. The room I let them rise in was not very warm, so after an hour, they were still pretty flat. But people were waiting, so I started to deep fry them anyway. These little smushy discs puffed up right away: some became almost spherical, others into the familiar donut shape. 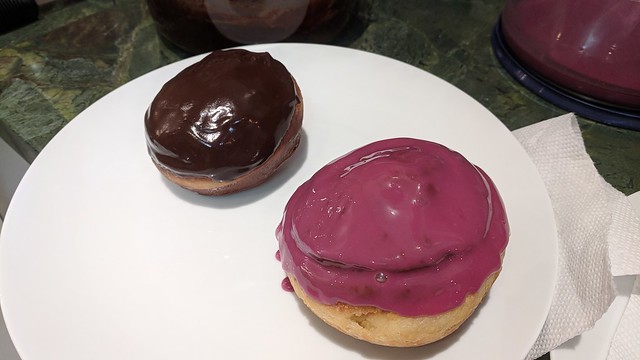 Once were sufficiently brown, I drained them on paper towels, putting them outside at 0°C to hasten their cooling. I made two glazes earlier in the day: a dark chocolate ganache (recipe), and a blueberry glaze (recipe), both from Saveur. To make the latter from the linked recipe, I substituted 100% blueberry juice for the cherry syrup.

These donuts were just okay. Eaten with minutes of them coming out of the oil, they were not too bad, sweet and yeasty. Some were dense and bready, while others were fantastically hollow, ready to be filled with lemon custard, strawberry jam, or chocolate sauce. I think getting a good rise after shaping is key. Leftovers were definitely not as good.