One thing I very much enjoy while staying at home these days, is making lunch. Maybe it’s the friendly flexing we have in a Slack channel at work, or just wanting to try different things each day, but I like planning something exciting to eat at noon each day. This week featured an exciting carb and fat explosion, aptly named a volcano. 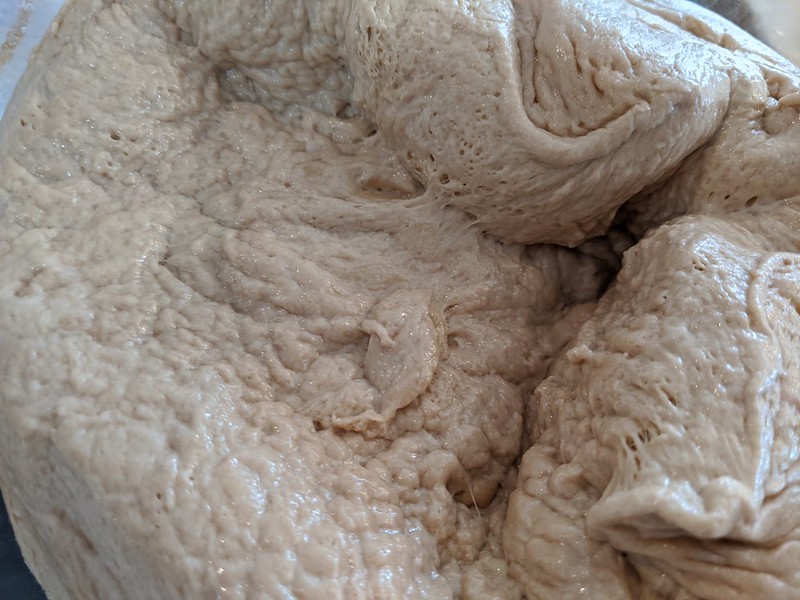 The recipe comes from the Milk Bar cookbook, and is one of the few savoury items on offer. It starts with a mother dough, a simple four-ingredient recipe that is used in a bunch of other exciting sounding things like Kimchi-Blue Cheese Croissants and Chinese Sausage Focaccia. I started making this bread dough at breakfast, as it only needs 45 minutes proofing time before it’s ready to be used. 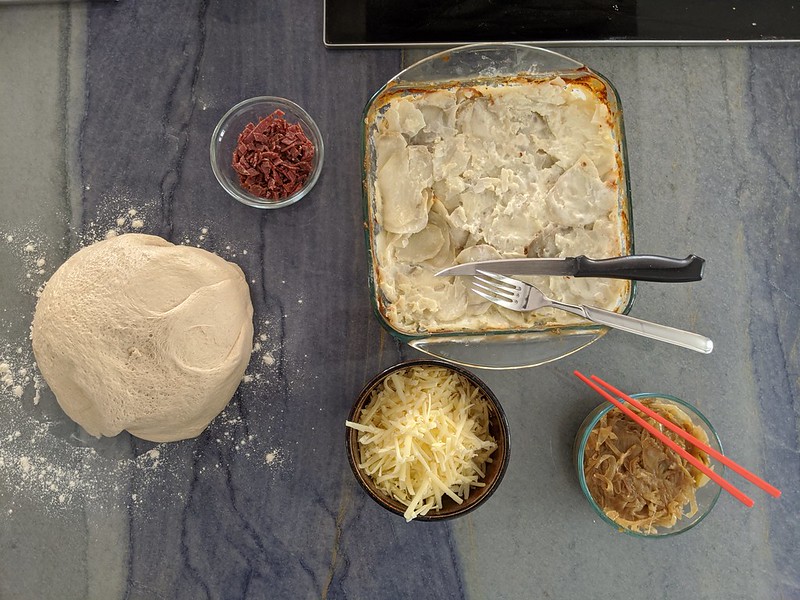 I did start the night before though, by making the caramelized onions, and the scalloped potatoes. The ingredient list frustratingly omits the weight of the potatoes. It matters, as you need enough of the infused cream to cover the spuds. Mine were not completely submerged, so I needed almost double the baking time to fully cook the potatoes. 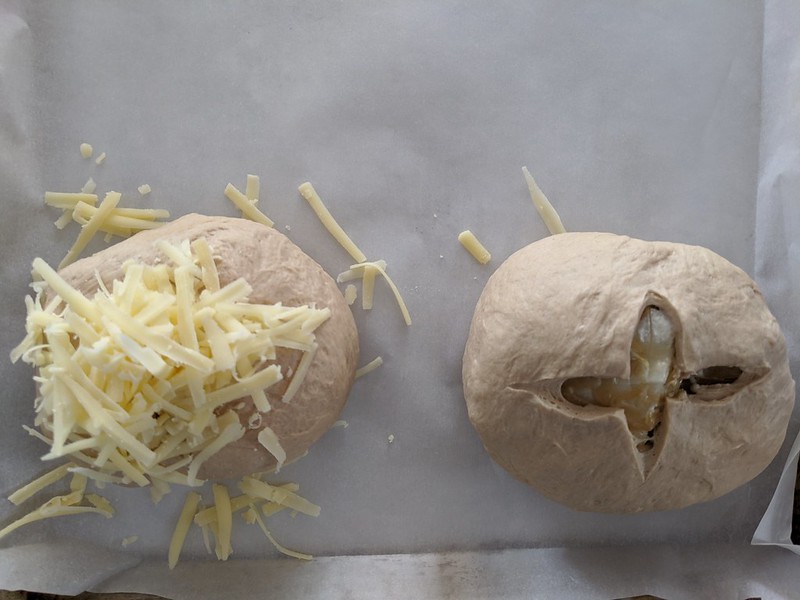 Assembly was a lot of fun. After stretching each piece of dough out, we piled on the onions and potatoes, then sealed everything in. This is where I messed up with the ratios a bit. I should have rolled the dough thinner, and used more potato. I had a lot of dough bunched up where I gathered the edges together (which became the bottom). 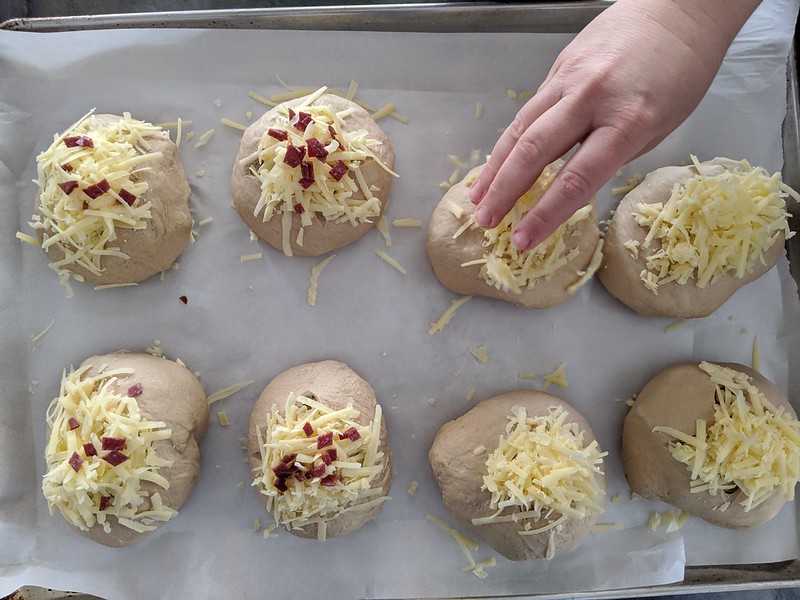 For half of the volcanos (from my double batch), I added some diced summer sausage in the filling, and on top of the grated Gruyere (so I could tell them apart after baking). I did it this way (rather than add the pancetta to the scalloped potatoes) so I could make half of the volcanos vegetarian. In our excitement, we forgot to egg wash the tops! 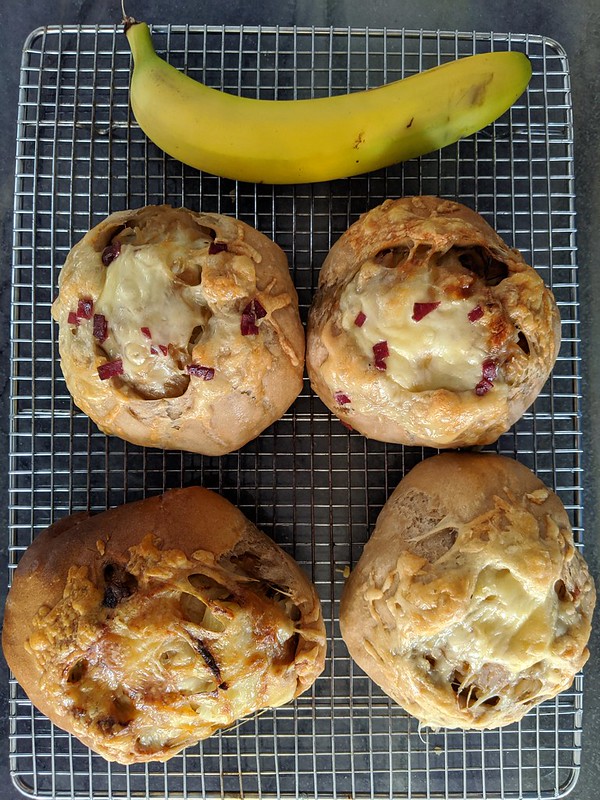 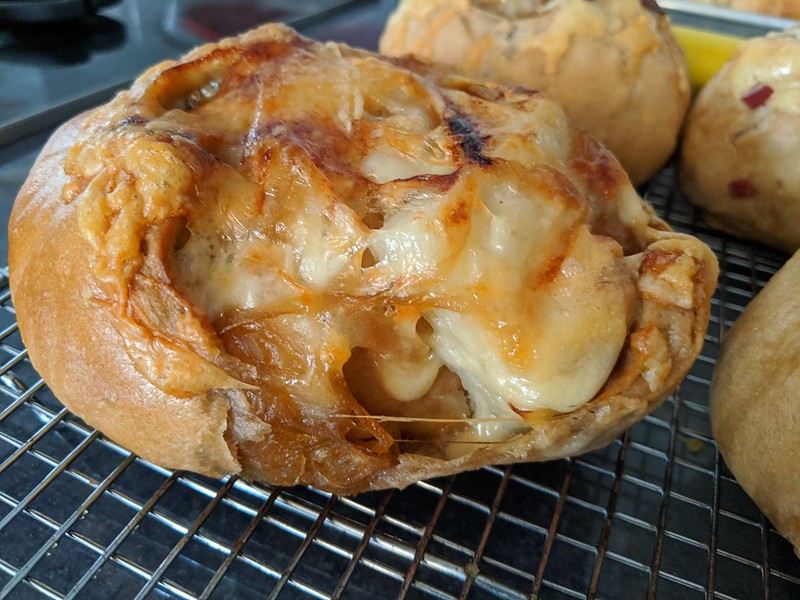 The baked volcanos were ENORMOUS and it was hard to eat an entire one. The savoury flavours of creamy potatoes, sweet onions, and tangy cheese combined in the most amazing way in your mouth. I can’t imagine how over the top it would be, if you also made the Mornay sauce that the original version incorporated, as described in this article in Serious Eats from 2009. 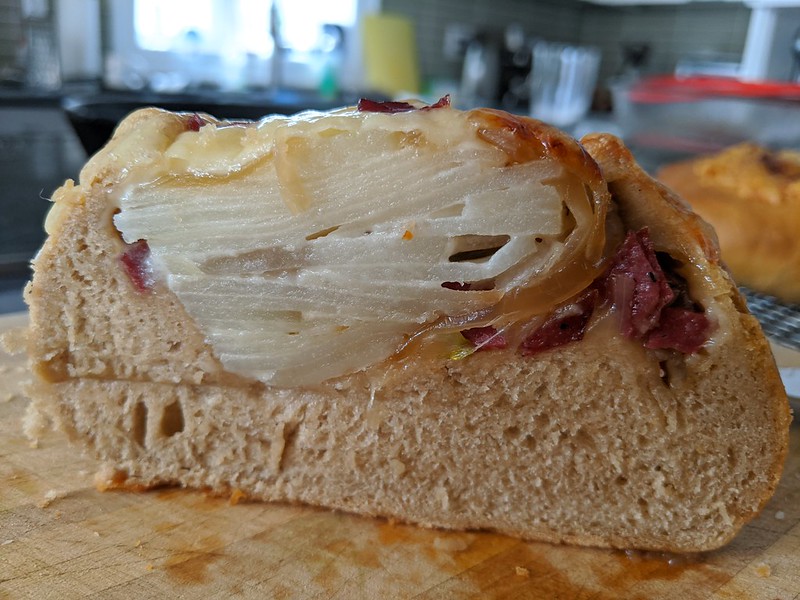 On the whole, an incredibly delicious savoury baked item that’s basically an entire meal (I had trouble finishing one). Do check out this video to watch Christina Tosi make volcanos (in a commercial kitchen) from start to finish. I wish I had looked it up beforehand to see how much potato to use, and the shaping technique.