As there were a number of kids at our Friday night dinner, I decided to make ice cream in addition to the cake. In keeping with the pareve meal, I turned to the Van Leeuwen Cookbook, which is my go-to source for vegan ice creams.

My first choice was the cold brew Earl Grey one, but my son convinced me to go with coffee instead. I had cashew milk in the fridge, and made the base using it… before realizing that one guest had a particular nut allergy. I put that jar away in the basement fridge for later.

Starting over, I remade the base using almond milk. Two tablespoons of coffee powder sounded like a lot, but after churning, I was disappointed that it was barely detectable. I’ve never found the Van Leeuwen vegan base to be too strong (from the coconut oil and coconut milk), but in this case, I think it overpowered the coffee. 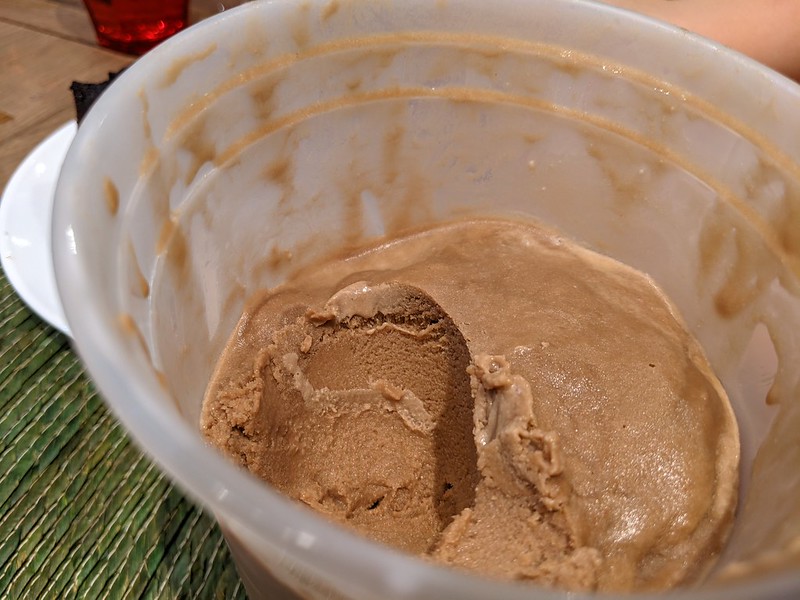 Two days later, I took the cashew milk base back out. Even after sitting for 48 hours in the fridge, it didn’t solidify, and I only needed a whisk to loosen the mixture. I added an extra tablespoon of instant espresso to it, and this time, the coffee flavour was more pronounced, but I still detected too much coconut. Maybe instant espresso isn’t the way to go here, and steeping fresh ground coffee would be better.