Does anyone else get cravings for bran muffins? Sometimes, when I’m at Tim Horton’s, I like to get a bran muffin. It’s pleasantly sweet, raisin-y, tender and coarse at the same time. But, then I look at the nutritional information and am reminded that every single one of their muffins has more calories and carbohydrates than any of their donuts.

So, as an avid muffin baker, I turned to making my own, since a homemade one would surely be healthier than store-bought, right? Unfortunately, the recipe I used didn’t have any nutrition facts. But it sure seemed like it was healthier. 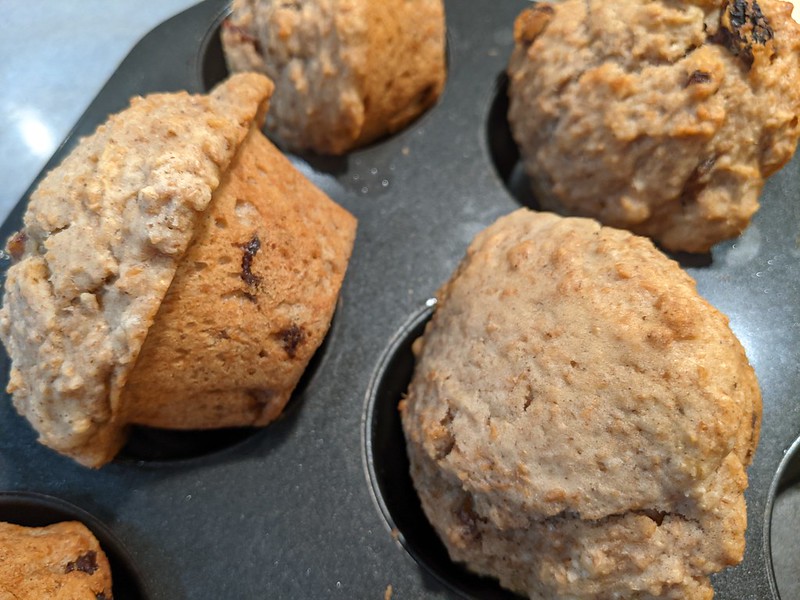 Aside from soaking the raw wheat bran in boiling water, the batter was easy to make. It uses Greek yogurt, whole wheat flour, a good dose of cinnamon, and raisins. Notably, it lacks molasses, which is often part of most bran muffin recipes. As noted in the directions, the muffin cups were quite full, and the domes were quite peaked after baking.

Flavour-wise, these weren’t as yummy as the ones from the home of “Canada’s Favourite Coffee”. They’re slightly dense, and were quite light in colour. I prefer my bran muffins more moist, and darker. My favourite still remains these bran muffins made from pureed prunes (!) instead of molasses. But, I like that I can control the amount of sugar and fat, and knowing every ingredient that went into my breakfast.