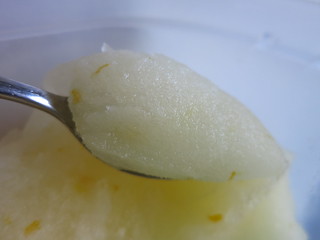 Notes: As a diabetic-friendly alternative, I made another sorbet for Passover using xylitol instead of sugar. I've used Splenda products in the past (either the standard white powder, or the 50% brown sugar blend) but dislike the noticeable aftertaste. Having chewed many a pack of Lotte Xylitol gum, I'm familiar with this sugar substitute but have never tried baking with it.

To make a double-batch of this sorbet, I replaced 2 ½ cups of granulated sugar with just under 2 cups of Xylitol crystals, intending to lower the overall sweetness of the sorbet. I proceed with the rest of the recipe as directed, including some Meyer lemon zest in the mix. After 25 minutes of churning, the texture was still a bit watery, and the canister was losing its coldness, so I just scraped out the slush into a plastic container.

Twenty four hours later, the sorbet was still slightly slushy. The taste was sweeter than expected, but did not taste like a low-sugar product, i.e. no major aftertaste. Xylitol is a reduced – not zero – calorie product. According to this industry website, it has 45% less calories and 75% less carbs than sugar and is diabetic friendly in that it is slowly metabolized and a natural insulin stabilizer. Wikipedia says 33% less calories than sugar.

In any case, it was a good experiment, and a good data point for future projects using xylitol. For me, substituting part of the plain sugar with xylitol would be a good compromise, but individual recipes would have to be tested to ensure the same resulting characteristics are achieved.