On Sunday evening, as I thought ahead to breakfast the next morning, I realized we were out of bread (again). But instead of walking over to the grocery store, I looked up a Cook’s Illustrated recipe for a superfast loaf (start to finish in under 2 hours) I recalled seeing from a few issues ago. 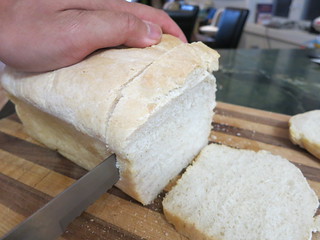 The key ideas for this recipe are to speed up the first rise by using double the regular amount of yeast, and to hold off on the salt. High hydration and bread flour provide structure since there is no kneading involved. For the second rise, water and salt are added. Because the short time frame doesn’t allow much fermentation and flavour development, honey, butter and whole wheat flour are used to enrich the dough. An egg wash and butter glaze (both of which I skipped) gives the baked loaf additional colour and flavour. 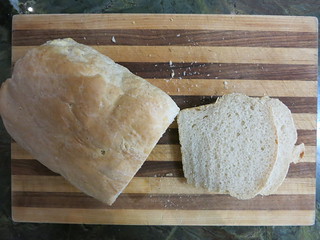 I made a mistake with the oven temperature and baked my loaf at 350°F the whole time but it reached the target internal temperature after an additional 10 minutes of baking time. My first impression after taking the bread out of the oven was, “I should have used the egg wash”. It looked very pale and pasty.

Not surprisingly, this bread turned out to be just like mass-produced white bread. It had a soft tender crumb, and not much taste. While some may like this type of loaf and the time this recipe saves, I’m going to choose flavour over convenience.