A few weeks ago, Flick saw someone on Facebook mention a “Chinese challah”. The cynic in me immediately scoffed and wondered aloud what would make it Chinese: Soy sauce? Lap cheong? Sesame? For this week’s Shabbat, instead of buying a loaf at the grocer near my office, I decided to investigate this idea. 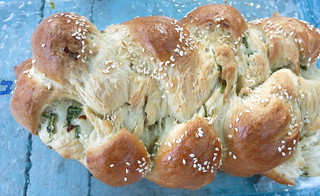 It didn’t take long to turn up Molly Yeh’s blog post describing a Scallion Pancake Challah. If you’re not familiar with this savoury treat, it’s a flat, flaky, fried dough containing lots of green onions. Wikipedia has an entry under cong you bing. The cooking techniques vary: one recipe instructs you to fry the minced scallions and add lard to the dough, another one uses cold water and a coiling technique to laminate the dough, while this one uses a boiling water dough.

Yeh’s inspiration for the idea was her own Jewish-Asian background. Come to think of it, when we were in Shanghai, I tried a scallion pancake from a street vendor near the metro station closest fo the Jewish Refugees Museum. It was so tasty and cheap (a few RMB), I immediately ordered another one.

Her recipe doesn’t incorporate any of the scallion pancake’s techniques to produce flakiness, just the ingredients. I started the recipe on Thursday evening intending to finish the challah before bedtime, but fell asleep during the first rise. Flick punched down the dough and put it in the fridge. The next morning, it had risen enough to lift the lid off the bowl. I weighed out three equal pieces, rolled them into fat ropes, then flattened each one.

After brushing each length with sesame oil, I sprinkled scallions, chili flakes, black pepper and salt over each one. From my experience with making filled challahs, I knew that overfilling or wetting the edges would prevent each log from sealing. Indeed, I had trouble pinching the sides closed due to the oil. Grabbing the outside of the dough, and pulling it around the open edge helped somewhat.

The prescribed baking time of 25 minutes wasn’t enough to brown my loaf, so I left it in for an additional 20 minutes. Despite not browning the scallions beforehand, the smell of this bread while it’s baking was amazing. My finished challah looked very much like the one on Molly’s blog, expanding sideways rather than upwards. I attribute the density and lacklustre flavour of the loaf to the poor underlying challah recipe (only 2 eggs, and a single rise). Using a different base challah dough, I’m sure I could make a tastier version.

As we tore into it during Shabbat, I wasn’t exactly reminded of a scallion pancake. But we all enjoyed this interesting variation and I’d like to try it again this Friday. The only downside to a savoury challah is that you can’t use it to make French toast on Saturday morning!