For Shabbat dinners on Fridays, I often make the bread from scratch. On weeks where we’re too busy, I’ve discovered that the Fresh & Wild near my office stocks challahs from Harbord Bakery. But this past Friday, I wanted to try making a whole wheat variation. 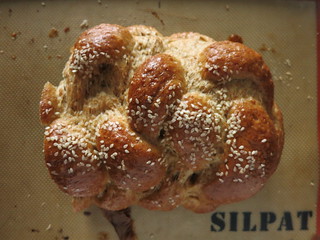 Peter Reinhart’s Whole Grain Breads provided the recipe. I made the soaker and biga on Thursday evening using Red Fife whole wheat flour. The biga never turned into a tacky dough for me, and instead resembled a stiff muffin batter.

Early on Friday morning, I completed the final dough. To keep the bread from being too “healthy” tasty, I used white bread flour in the final dough instead of whole wheat. I needed a lot of additional flour for the dough to come together, maybe ¾ to 1 cup more. By the time I was done kneading, it was still a very tacky dough. 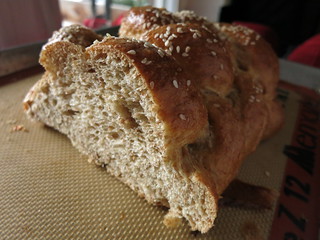 I rolled out six strands into long ropes, well longer than Reinhart’s recommendation of about 25 cm (10 in). In fact, they were so soft and long, that I folded each one back on itself and re-rolled them. I left the remaining proof, egg wash and baking with Flick.

The baked loaf was a bit of a letdown. As you can see from the first photo (which shows less than half the loaf), the braid spread out sideways and didn’t rise much vertically. The texture of this challah was also too crumbly. My best guess as to what heppened was that the coarsely ground whole wheat flour altered the ability of this dough to absorb liquid, and I didn’t knead the additional white flour enough to develop its gluten. Both of these combined to make a weak loaf that spread apart instead of rising. I would try making this again with a finely milled whole wheat flour.