We were in charge of dessert again for a monthly Friday night potluck. I’ve been making a lot of apple things recently, so I thought it would be good to change things up. What better than a warm tart, made of chocolate and banana? Why, two tarts, of course!

Since the full Sweet Tart Dough recipe makes enough for four 8 3/4” tins, it was not a lot of extra work to double this tart recipe from Pierre Hermé and Dorie Greenspan’s cookbook. Blind baking two tart shells is also a snap. 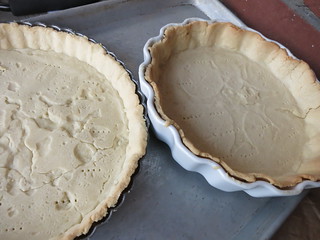 I only made one batch of the booze-soaked raisins, as my wife is inexplicably not a fan. Instead of dark rum, I substituted a chestnut liqueur. 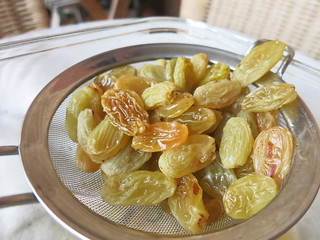 The directions for caramelizing the banana slices sounded very tasty: infusing the fat with a piece of Habanero pepper, frying the fruit until the exterior browns, then garnishing with black pepper. For the first batch, I used what I had, namely Jalapeño pepper, but a few seconds after the slices went in the pan, I encountered problems. The 1/8” slices of banana got soft very quickly over high heat, and didn’t get a chance to caramelize. In fact, they only coloured because of the browned bits of butter. 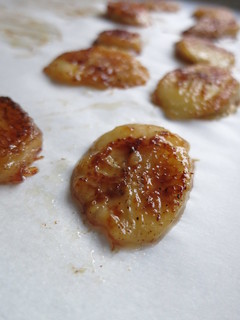 For the second batch, I tried slicing the bananas thicker (about ½”) and increasing the heat. These were better, but still started to fall apart. There wasn’t anything wrong with the taste of these bananas, but for nice looking slices, I imagine blowtorching is the way to go. 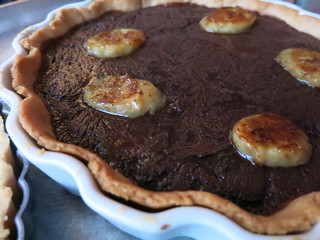 The ganache needs to be carefully made and the directions call for mixing the chocolate and butter at a specific temperature. If you’re not careful, the mixture won’t emulsify, and you’ll end up with drops of butterfat that will leave a slick on the surface. 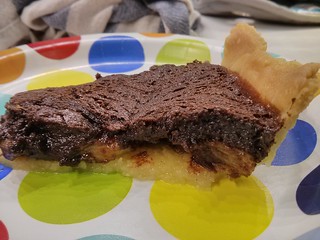 This is a standout tart. Served slightly warm, each bite is rich and chocolatey, punctuated by chunks of sweet, cooked banana. I couldn’t taste any heat from the chili, so I would increase the amount of black pepper next time.