Milk Bar cakes are complicated, multi-step affairs, doable in one day, but more practically made over several days. For a recent anniversary, I decided to tackle their chocolate chip layer cake, made with passion fruit and coffee flavours.

The recipe consists of four components, three of which can be made in advance. I made two cakes, for serving on Saturday and Monday. 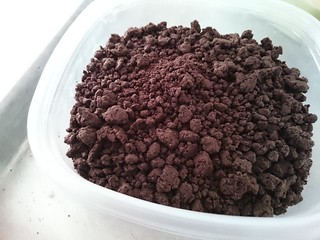 The first component I made was also the simplest. The crumbs are just a mix of a bunch of dry ingredients and melted butter. I didn’t even bother with a stand mixer, I just stirred everything together with a silicone spoon. Because of the one-to-one ratio of flour and cocoa, these little bits are quite chocolatey. In a pinch, you could just substitute Oreo Baking Crumbs. 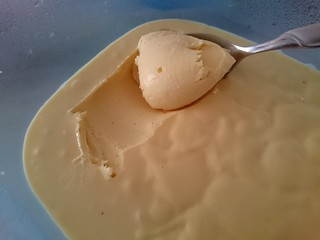 I’ve had a frozen block of passion fruit purée in my freezer ever since I bought the Milk Bar cookbook and saw this cake recipe. An overnight thaw was the only advance prep I needed. The curd uses a blender in two steps: at the beginning to dissolve the sugar into the purée and eggs, and after the mixture has been heated, to dissolve the gelatin and emulsify the butter. Though the recipe doesn’t say to do it, I strained the cooked curd before it went into the blender for the second time. 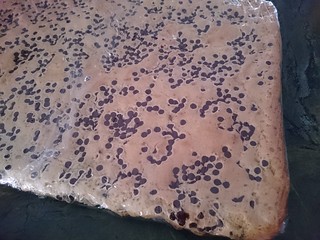 The directions for this cake warn the baker to be patient and to ensure that the ingredients are well creamed at every step. I definitely made sure that I scraped the bowl regularly, and used a timer to ensure I wasn’t skimping on the mixing times. Tosi says that if you don’t follow the directions carefully, you’ll end up with cake on the bottom of your oven floor. Which is what happened: 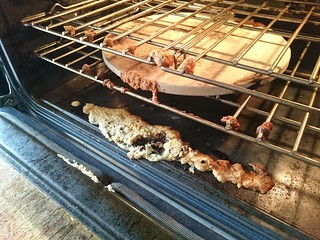 I baked it for an extra 5 minutes to ensure there wasn’t any raw cake. It rose a lot higher than the recipe indicated, and also browned a bit more. This turned out to be a good thing when later cutting out the cake rounds. The drier, top side did not stick to parchment, and made transferring the cut pieces a lot easier. 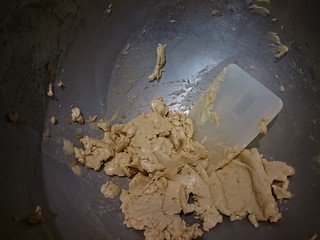 This was the most problematic component, and the one that needed to be made a la minute. Since I made two cakes, I got to make this on two separate occasions. The first time, my butter was a little too cool, and I found it very difficult to incorporate the full quantity of coffee milk. I tried various things, from increasing the paddle speed, to warming the bowl with my hands. The second time, my butter had many hours at room temperature to soften, and I also heated the coffee milk. Still, it was pretty messy to get the liquid incorporated into the fat. But magically, in the end, it came together in a homogeneous mixture, but just barely. 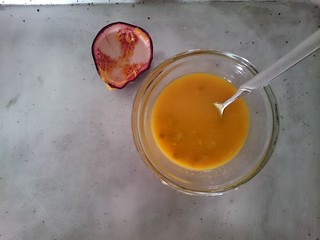 I read something on eGullet a while back about using fresh fruit juice to “re-invigorate” pasteurized juice or puree. Something about enzymes bringing the fresh flavour back. Anyway, I added the pulp of a fresh passion fruit to the purée to be brushed onto the cake. 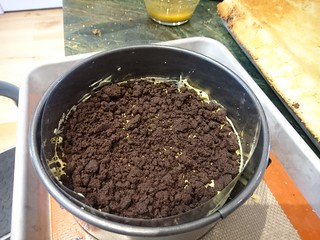 My six-inch cake “ring” is really a small springform pan, so I couldn’t use that to cut out the cake rounds. Instead, I used a small serrated knife to trace out the pieces I needed. The coffee frosting was not very soft, so I needed a spoon and the offset spatula together to try to spread it over the surface. 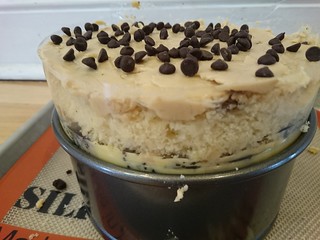 That’s the assembled cake above, ready for the freezer. Since I wouldn’t have enough time to freeze 12 hours, and then thaw in the fridge for 3 hours, I put the cake straight into the freezer on Saturday morning. After 4 hours or so, I took out to room temperature for about an hour. 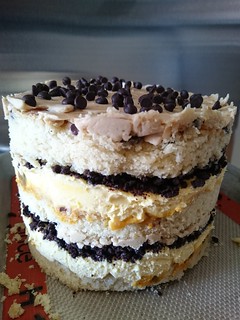 I’m not familiar with the passion fruit-chocolate-coffee combo, but Tosi says it’s a common pairing in the pastry world. These flavours worked well together for my taste, but I would suggest a few improvements if I were to ever make this again.

First, the curd is too rich and thick. Not only does butter contribute a strong dairy aroma, it also thickens the chilled curd considerably. I would reduce the butter by half, to allow the tropical flavour to shine, and to soften the curd. And second, I would replace the coffee frosting with a more traditional buttercream that is easier to make and spread.