While browsing for relatively healthy cupcakes for a celebration on Saturday, I came across a carrot cupcake recipe that didn’t use refined sugar. It was an ideal dessert for a one-year old’s birthday BBQ.

The recipe comes from Martha Stewart’s Cupcakes, a book I bought a long time ago, and consult from time to time (usually around birthday season). It’s simple enough that I was able to start on Saturday afternoon and have them ready for serving later in the evening. 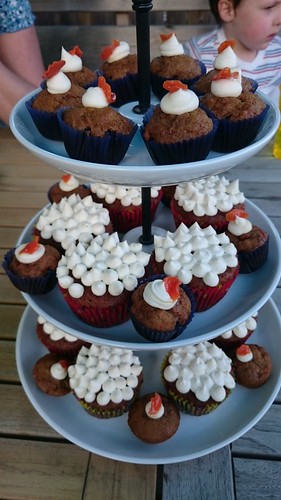 While it’s an optional garnish, I wanted to give the candied carrot slices a try. Using the food processor, I let a small carrot fall through the slicing disc, and cooked the rounds in batches in maple syrup. (The leftover syrup was good for sweetening tea, etc. but did turn solid as the syrup reached the hard ball stage.) 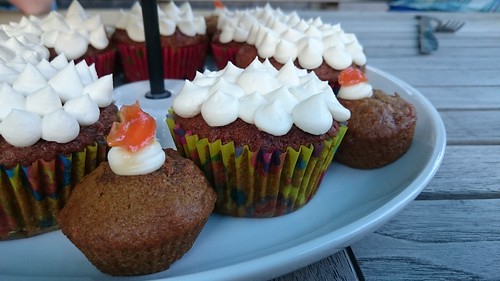 An oil-based batter is typical for carrot cake, and this recipe is a simple two-bowler: dry ingredients, combined with wet ingredients. The flavourings are pretty simple: molasses, maple syrup and cinnamon. It only uses egg yolks, so you’ll be left with five whites.

The frosting is simply a pound of cream cheese with a ¼ cup of maple syrup. I piped it on as suggested in the recipe, using a small round tip to cover the larger cupcakes, and a single blob for the mini ones. Lacking kitchen tweezers, I used chopsticks to place the carrot chips on top of the tiny cupcakes. 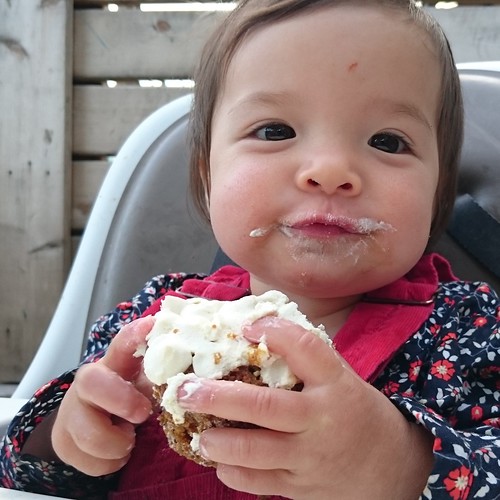 This cupcake was a winner: moist, not too sweet, and easy to make. I would skip the garnish next time: the chip is kind of chewy and would have been better if I it were more dehydrated. But as you can see, they made the birthday girl happy.