While it might not be a traditional Hanukkah food item, my wife came up with the excellent idea of serving focaccia at our party. It’s an airy, chewy flatbread, topped with herb oil.

To avoid craziness on Sunday, I started on this recipe much earlier in the week. On Wednesday, I made the herb oil. Reinhart suggests using a plain, light olive oil, rather than an expensive extra-virgin one, since the delicate flavours would be lost amidst the herbs. My combination included fresh parsley and basil; dried oregano, thyme and rosemary; dried garlic and onion powders; sweet paprika; coarse ground black pepper; and kosher salt. 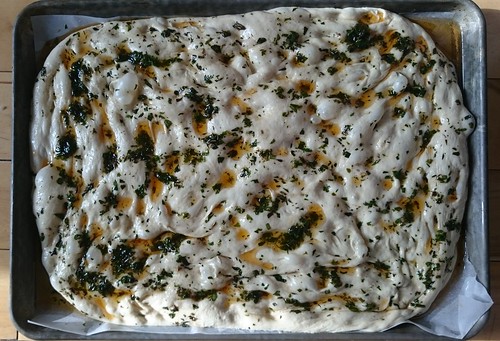 After the dough was kneaded in the mixer, you need to fold and rest it a few times. Then, you use fingertips to spread the dough to fill a sheet pan, pouring the herb oil to fill the dimples. At this point, I put the dough into the refrigerator, where it stayed until Sunday, two and a half days later. 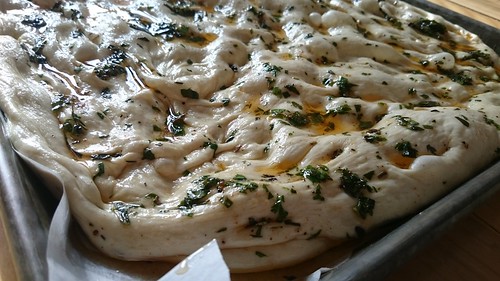 When I took the pan out of the fridge on Sunday morning, there were a few large holes, which I flattened with my hands. They would otherwise burn easily since the dough is so thin. Even more herb oil went on top, while the dough completed its final rise. 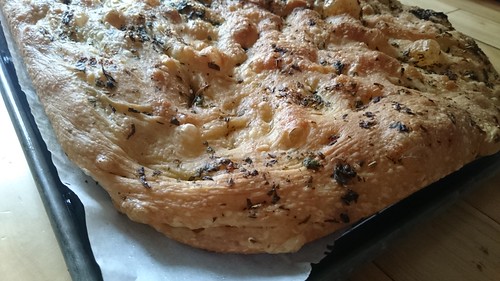 Focaccia is thin so it doesn’t take long to bake in a hot 450°F oven. Mine was done around the expected time, about 20 minutes. Quite a bit of oil was still left on the pan, though a lot of it did get absorbed. 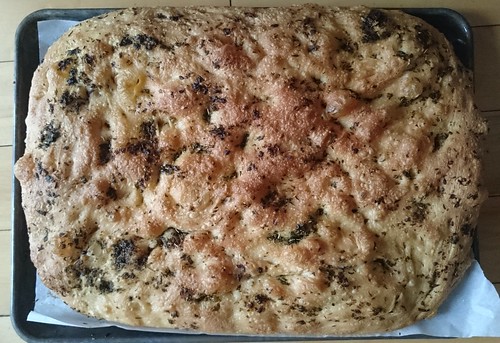 I was pleased that the bread rose to a good height, and was quite soft, featuring irregular holes throughout. A very successful focaccia, with a recipe that has a flexible cold fermentation period, simplifying the process of getting fresh bread on the table.