When I was younger, our family would occasionally order congee accompanied by a plate of jauzaagwai (油炸鬼). Deep frying wasn’t something my parents did a lot at home, so it was a treat to eat a fried breadstick at a restaurant. Now that I have my own family, cooking things in hot oil has turned into an annual tradition, as part of Hanukkah. This weekend, our party featured not only doughnuts but churros.

Rather than tossing the fried dough in cinnamon sugar, I used a recipe that incorporates the flavourings into the batter itself. The milk is heated and combined with a cinnamon stick, vanilla, and nutmeg before being used to make the choux paste. 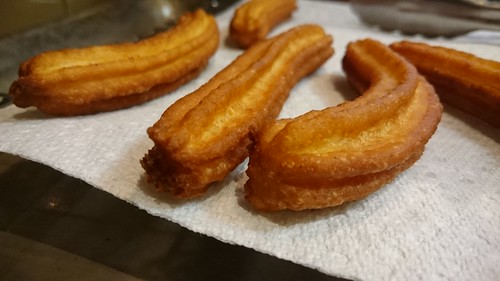 After stirring the flour in, I thought I had measured incorrectly: it was extremely stiff. Even after incorporating the eggs in, the batter looked a bit lumpy. I used an Ateco 846 closed star tip, and needed a lot of pressure to squeeze out the lengths of dough. As they are too soft to pipe out ahead of time, you need to do it directly over the oil. And you need to pinch off the end close to the surface, so as not to splash oil everywhere. 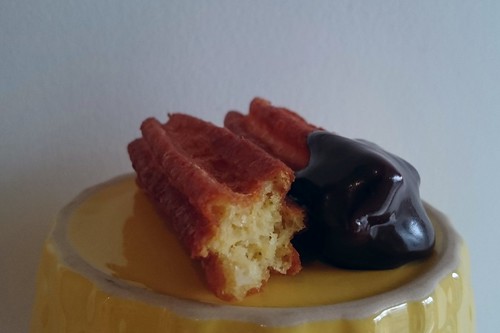 The finished churros turned out really nicely: deep golden brown on the outside, with a vivid interior (from the rich yellow eggs I used). One critique I had was that they were more crunchy than crispy. Maybe making them thicker (using a larger diameter piping tip) would achieve the right crunch to crisp ratio. 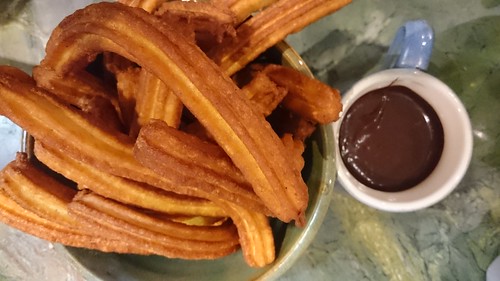 I didn’t feel that the dipping sauce was successful or even necessary. The Bonne Maman dulce de leche I used was very thick, so the sauce became more like a spread as it cooled. Combining caramel and chocolate like this diminished both ingredients: I would have preferred either one alone. We totally overestimated how many churros we needed, so we froze the leftovers.