Over the past two weeks, I’ve built up a liquid levain (wet sourdough starter) again and went back to the bread recipes in Bouchon Bakery. The first few loaves I made with this starter were a rustic white bread that had great chew, and a mild sour flavour.

I fed the starter twice daily for about a week, experimenting with various locations in my house: in the oven with the incandescent lamp on, a high shelf on the warm, third floor, and on the kitchen counter. The starter was quite active with bubbles, and by the end of the first week, I started adjusting the temperature and water level to develop a more sour flavour. 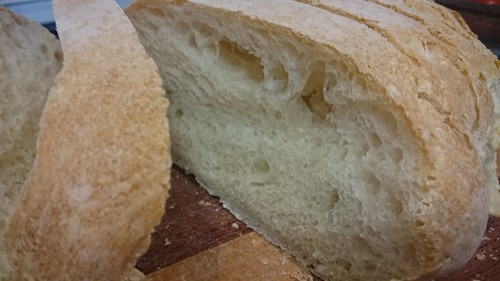 From the Bouchon book, they suggest increasing the temperature and decreasing the water. There were also a lot of tips from this article in Brød & Taylor, mainly, fermenting at a warmer temperature (up to 29°C) and using some rye flour. These are things I will have to try in a few weeks. 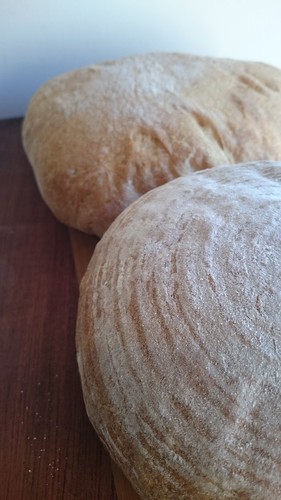 The recipe begins with a long stand mixer knead of 20 minutes, as with the other breads in the book. The process of patting, stretching, and folding the dough directly affects the structure, as I discovered after making two loaves. Too much patting deflates the bubbles and the resulting bread has a finer texture, instead of an open, airy crumb.

I experimented with letting the dough proof on a linen, as well as in a rice-flour coated banneton. I prefer the former, as it yields smaller slices, but both ways turned out fine. 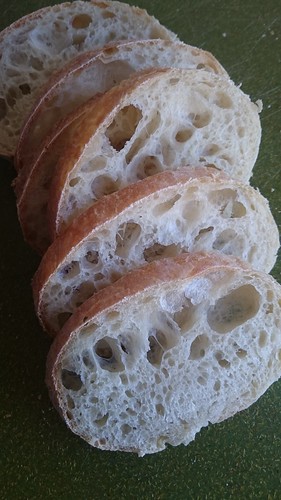 Overall, this was a promising start to my sourdough experiments for the summer. However, I need to work on my steam generation, as the baked loaves turned out a bit pale, without the deeper golden colour shown in the book’s photographs. The recipe appears alongside the Pain Palladin which has a slightly different proportion of flour, levain and yeast, so that’s one I’ll have to try for comparison purposes.