I wanted to make a quick dessert for our casual Shabbat dinner last night. A simple apple and custard square recipe caught my eye in Baking Chez Moi, but, because I was rushing after coming home from work, I started making the wrong recipe, this apple matafan!

A matafan, from what the Interweb tells me, is a traditional, hearty savoury breakfast item from the Savoie region of France. In Dorie’s version, she uses apples instead of potatoes, making it a sweet start to the day, similar to a German apple pancake or Dutch baby. 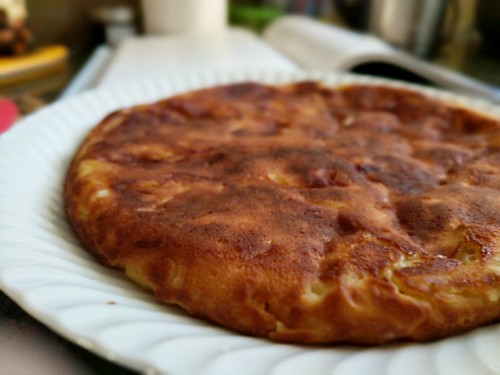 Since no one wanted a pancake for dessert, I put away all the pre-mixed components (melted butter and milk, flour mixture, whipped eggs and sugar) in the fridge for later. When I woke up this morning, I made the batter, then mixed in thinly sliced Macintosh apples. 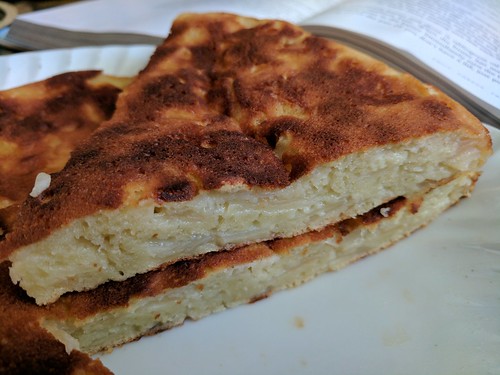 The directions call for frying it gently on the lowest possible heat, but on my gas range’s simmer setting, that was too low. After 15 minutes, the bottom had barely begun to brown, and was still runny on top. Next time, I’ll know to use a slightly hotter setting on that small burner, or perhaps the lowest setting on one of the larger burners.

Anyway, this thick, fruit-filled pancake was delicious, spread with a bit of apple butter. The interior was soft and tender, but the outside was a little overcooked. I’d definitely make it again, cooking it less, and with apples sliced a tad thicker (I used the Breville food processor’s adjustable slicer on setting 3).