For a school “parent party” we went to on Saturday night, we volunteered to make a dessert. I had several potential candidates in mind the night before, and settled on one of the most time-consuming recipes on Saturday morning. It was well worth the effort though, as this cake featured brittle nut meringue, coffee buttercream, chocolate glaze, all combined in an impressive package.

The recipe comes from Cook’s Illustrated’s November 2012 issue. The first component was the almond-hazelnut meringue. It was a breeze to make in a stand mixer, but the time-consuming part was baking and cooling it. I could have made it the night before, had I not felt so tired. 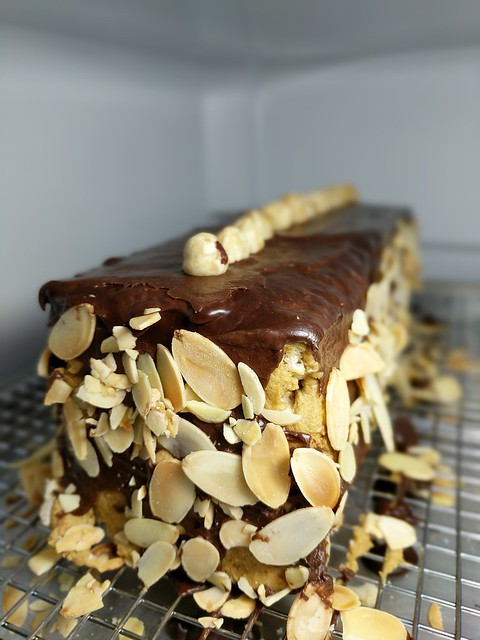 While the meringue was drying in the oven, I worked on the pastry cream. The helpful recipe developers decided to employ a German buttercream to avoid having leftover egg yolks. While this part was straightforward, combining the chilled pastry cream with the butter was a bit problematic. I think I incorporated the fat too quickly, and didn’t allow for enough whipping time as my buttercream wasn’t creamy, and didn’t emulsify properly. 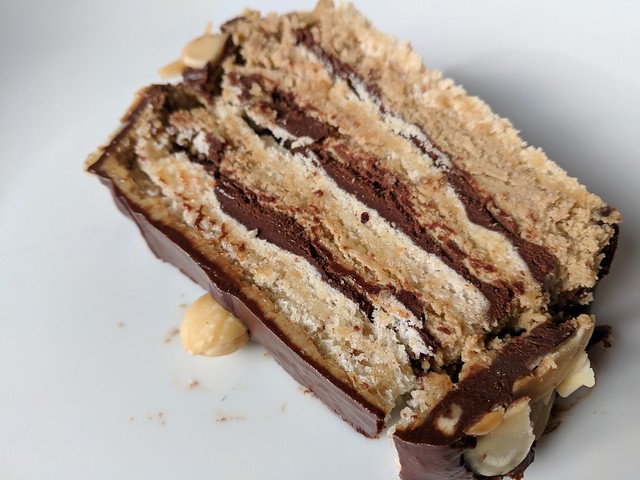 After making the chocolate ganache, I was ready for final assembly. Sawing the big rectangle of meringue was a tense affair, but I made it through without any significant breakage. Do measure carefully though. If you want the stack to be perfect, each long rectangle has to be exactly the same width. I followed the recommended ½ cup of buttercream, and ¼ cup of ganache per layer, to ensure that I would have enough to coat the top and sides. 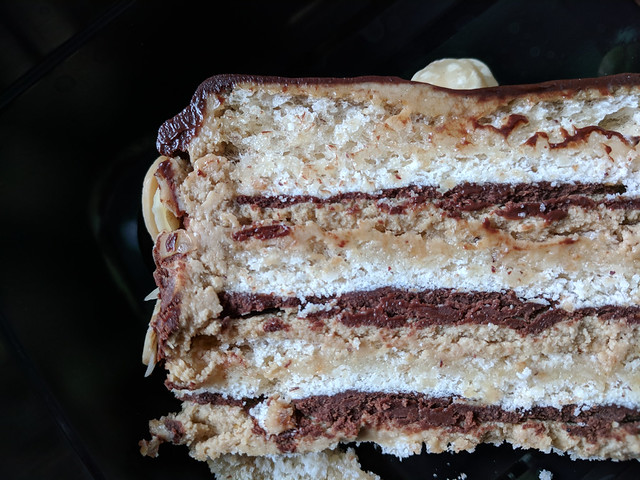 After 2 hours of chilling, I was ready to pour the remaining chocolate glaze over the cake. There’s barely enough to do so; next time, I would make more. If you don’t have enough for the sides, the sliced almonds will have nothing to stick to. Once all the garnishes are applied, the cake needs another 3 hours of chilling.

So, was it worth it? Definitely! This dacquoise was a lot of work, and a lot of waiting, but the first forkful of hazelnut-chocolate-coffee cake was a delicious reward for all of that effort. Each slice is beautiful to look at, and the contrasting textures and flavours make it a sophisticated treat as well.